If you are new to hot tubs, the act of choosing the right sanitizer for your hot tub can seem overwhelming. We can help! Every hot tub owner wishes to keep their hot tub sanitized with crystal clear water at all times. The risks associated with unclean water are plenty, and it is important to use sanitizers at proper levels. Traditionally, hot tubs are sanitized with either chlorine or bromine. Today we have many variants of sanitizers, each having their specialty and composition

When it comes to traditional hot tub chemistry, bromine and chlorine are the two options for hot tub sanitation. They both function in a similar way to kill contaminants, but their reactions differ. Although chlorine is preferred to bromine in the hot tub industry, bromine can be preferred by owners who find the bleach smell of chlorine annoying. Through this guide, we intend to shed some light upon what bromine is, how it works, and what are its pros and cons.

If you are one those hot tub owners who assume that chlorine and bromine are chemically unique, you must be surprised to know that this is not true. Bromine comprises of about 82% chlorine. In spite of this, bromine doesn’t have the bleach smell of chlorine and this is the reason why some hot tub and pool owners prefer using bromine over chlorine. As a sanitizer, bromine is traditionally available in the tablet form which needs to be added to the hot tub using a chemical feeder or floater.

How is Bromine Used in a Hot Tub?

Before using any chemical in your hot tub, it is necessary to read the instructions that come with it. For the start, several tests are needed to be done like pH, alkalinity, calcium hardness, etc. Add chemicals to adjust the pH to 7.4-7.6, alkalinity to 80-120 PPM, and calcium hardness level to150-250.

Once the water in your hot tub is balanced, you can start adding bromine to the hot tub. The quantity of bromine to be added depends upon the type of bromine source used. If you are using granules, create a bromide reserve by adding sodium bromide granules in a ratio of ½ ounce per 100 gallons of water. If you are using bromine tablets, add 2-4 to a floater and adjust the flow of it.

To maintain a balance in the water, it is recommended to do a weekly shock process using a non-chlorine source. You need to make sure that the jets are running during this process and the levels of pH, bromine, alkalinity, etc. are stable. The shock process is necessary because bromine dissolves with contaminants like bacteria and algae in the hot tub and needs to be oxidized so that it can work on more contaminants 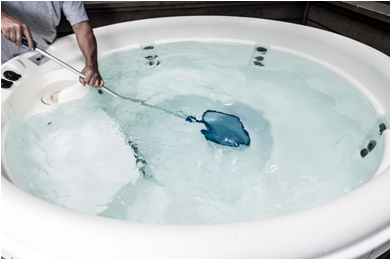 Bromine vs. Chlorine – Pros and Cons

If you are considering investing in bromine, it would be helpful to know the pros and cons of these sanitizers. Both bromine and chlorine are effective hot tub sanitizers but they function differently. Both have their limitations and advantages, let us look at a comparison between them with respect to key factors.

Hot tubs treated with bromine become cloudy more often than hot tubs that are treated with chlorine. Chlorine hot tubs experience more frequent pH imbalances than bromine hot tubs. These factors will require you to do frequent maintenance procedures on your hot tub.

If you are someone who believes that chlorine is harsher than bromine, know that both are almost equally harsh. With chlorine, the advantage is that it dissolves with the contaminants quickly and then gets filtered out upon giving the hot tub a shock. But with bromine that is not the case. When bromine molecules combine with a contaminant, they don’t get oxidized completely during the shock process. The remaining bromine in the water makes it quite unfit for reuse.

Due to the small size of hot tubs, the ratio between water volume and space is lower than the pool. This makes waste materials accumulate faster in hot tubs. In this scenario, bromine would prove to be a better disinfectant for your hot tub than chlorine as it has better effectiveness because it can get reactivated to further sanitize your hot tubs water. However, the disadvantage of bromine is that it tends to stay back in the water even after performing a shock and can disrupt water chemistry. Chlorine, on the other hand, is less effective but gets flushed out when you shock the hot tub.

Chlorine is more preferred over bromine for the fact that is it less expensive than bromine. But bromine has the advantage of remaining active in the water for a longer time. So, the quantity of bromine that you will use per session of sanitization will be much lesser than the quantity of chlorine you would use.

Sanitizing chemicals like bromine and chlorine get affected by sun exposure. If you reside in a place that experiences longer days of summer, you would need to invest in smaller amounts of bromine, because bromine breaks down in sunlight. But if you are using chlorine, you can protect it from sun exposure by adding a stabilizer to it. Sun exposure causes bromine to leave a residue called sodium bromide, which if treated with a shock can be reactivated and hence can be further used. 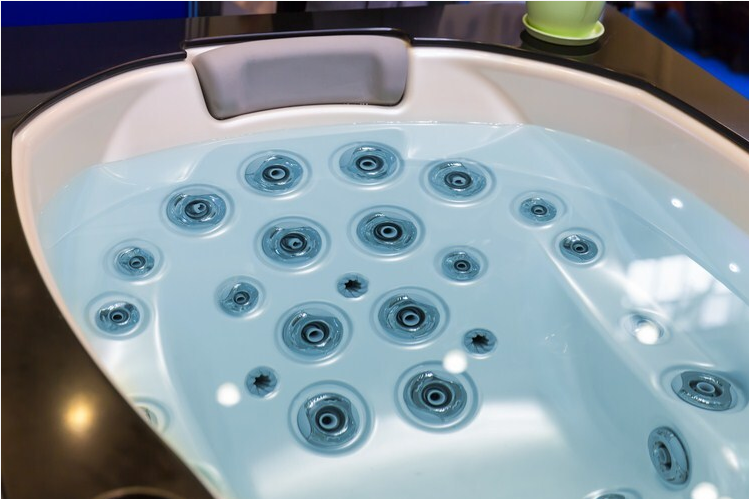 By now you probably have an idea of the several risks associated with using bromine as a sanitizer for your hot tub. But to briefly summarise them, bromine has the following risks:

Exposure – Bromine is believed to be gentler than chlorine on skin and eyes, but you would need to be careful with the amount of bromine you use in every session of sanitization as it can cause itchiness on your skin and redness in your eyes.

Stability – The pH of your hot tub has a major impact on the stability of bromine. Slight variations in pH can affect the performance of bromine and hence lead to further reactions. You would need to constantly monitor pH levels while using bromine in your hot tub.

Bromamines – When bromine combines with ammonia emitted from water contaminants, it forms a compound called bromamine which interferes with the ability of bromine to sanitize the water of your hot tub. You could be getting proper readings on various tests, but your hot tub’s water could still contain bacteria because bromamines lessen the effectiveness of bromine.